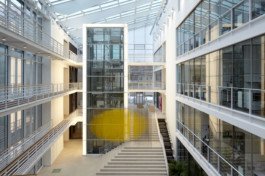 Back to Category: All Projects // Office

The official opening of the new LHI headquarters in Pullach (near Munich) saw the completion of a new major project in close cooperation between the client, the architect, and the interior designers. The client’s decision to move the company premises, which were formerly situated in three buildings throughout the city center, to a green, idyllic slope near the high riverbanks of the Isar is rewarded by the satisfaction and feedback of the company employees. The building reflects the desire for a campus character in that all facilities such as the conference zone, canteen, and office areas are combined in a compact space with communication areas and green spaces. Instead of a single voluminous building structure, the individual buildings blend with the environment and spread across six interconnecting building elements. Tradition, identification, and emotion play an important role and are implemented in the use of regional materials and the surrounding landscape. The focal point of the building is the generously dimensioned lobby in the style of a Greek agora, which is simultaneously a meeting place, lounge, and event area. 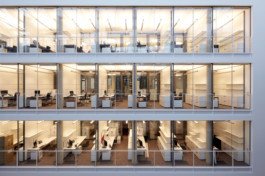 Visitors are welcomed not by a classical reception desk but by a communicative meet-and-greet area with a reception brand wall. An impressive staircase leads from the entrance lobby on the ground floor into the hall. The natural change of elevation turns the actual “basement” into a courtyard with direct access to the green spaces and accommodates the different conference areas. The nearby River Isar is reflected by a water feature, emphasizing the natural concept. The spatial and acoustic separation of the meeting areas is supported by footbridges across the interior pool. 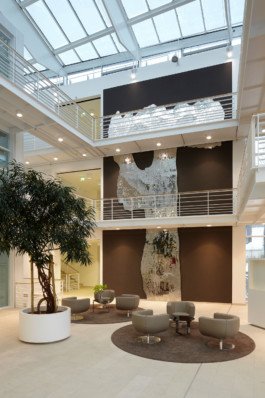 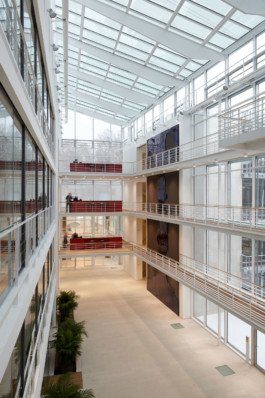 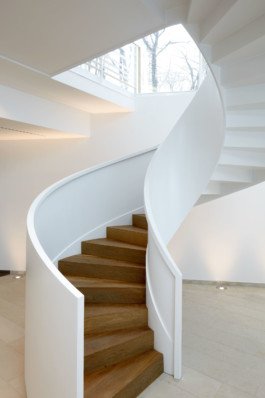 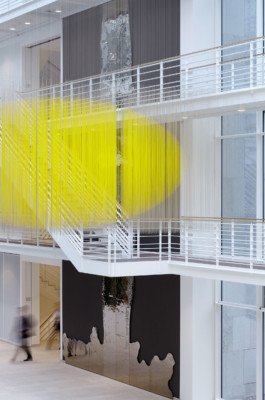 The hall culminates in a two-story, daylight-flooded canteen. A sculptural spiral staircase leads to a more intimate gallery with guest areas in which more discreet meetings can be hosted separately. The workplaces meet the latest requirements for a working area with a mixture of single-person and team offices plus meeting points at all levels. The relatively small single-person offices are supplemented by a generous central zone that serves as a repository and communication point. Individually configurable organizer rails on the flexible partition walls assist work operations. The team zones at the ends of the building elements are supplemented by communicative furnishings for informal talks and relaxation areas. The conference areas are absolutely state-of-the-art and are equipped with everything needed for global communication. Opposite the staircase cascade at the entrance and exposed to the gallery bridges, each story contains a coffee point with a view of the surroundings, ideal for informal chats and breaks. 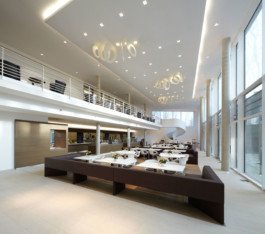 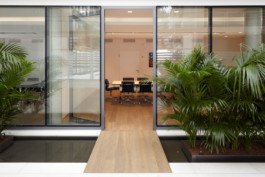 The materiality of the building is restricted to a few carefully chosen materials and colors. Bright natural stone for facades and floors, earthy natural hues, the use of oiled oak, and greige-beige textiles implement the natural concept. 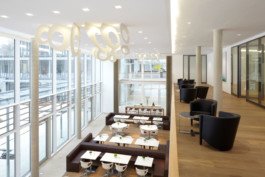 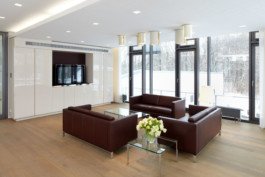 The interior of the hall with its bridges and walkways is painted in different white hues, like the inside of a ship. White-aluminum and anthracite-gray for surface areas underline the different functions. Only the red of the LHI logo creates vivid accents. 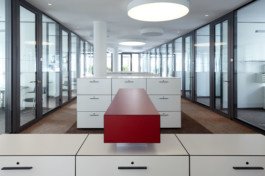 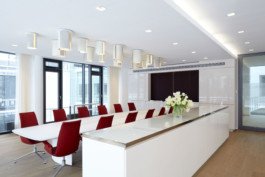 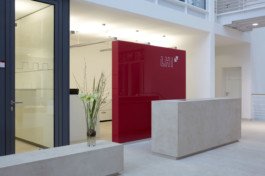 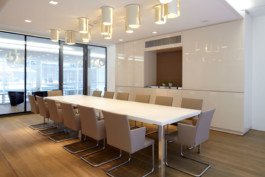 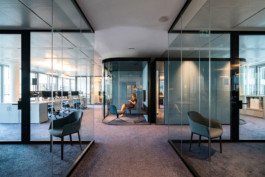 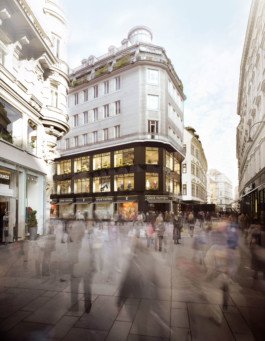 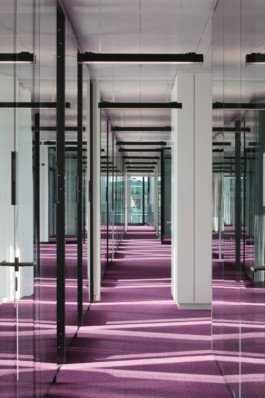 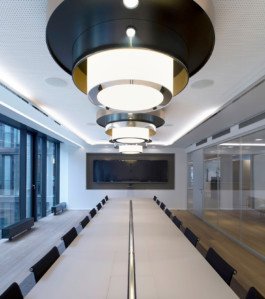