The building plot is located on the edge of a trading estate at the transition to green space. A singe building combines the administration, production and warehouse functions, and enables equal, interlinked workplaces for all employees. At the same time, the compact building style offers efficient space utilisation. Two inner courtyards have been integrated to break up the large-format structure of the building, providing the staff with pleasant communal leisure areas. The building is further improved by the different heights of its elements, making clear the requirements of the different usage units and functions in the interior. 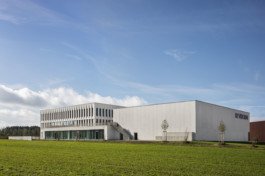 The building is designed as a massive construction, mostly with load-bearing exterior walls, reinforced concrete supports and massive stiffening cores. During the competition, ideas about sustainability and energy efficiency were already playing an important role, resulting in the decision for an interplay of open and closed spaces – a punctuated façade with large-area glazing for special areas such as the lobby, the cafeteria and the training areas. Thus the different usages can be seen in the façade. As an analogy to the company’s beauty products, a material was sought suggesting an association with the clean, colour-avoiding look of Reviderm. What was found was a concrete mix of acidified and water-resistant white cement that reflects the desired appearance. Furthermore, a sandwich construction consisting of prefabricated parts was chosen (180 mm load-bearing reinforced concrete supports with thermal insulation, 80-230 mm three-dimensional weather shell with a surface of white cement). This sandwich construction could be assembled in the factory and installed on site. The materiality of the façade combines the different functional areas and building heights to form a homogeneous building. The plasticity of the building shell is shown spectacularly, depending on the position of the sun and the mood of the day. 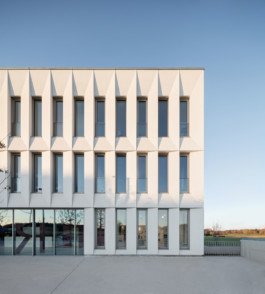